Posted on October 9, 2015 by irishroverpei 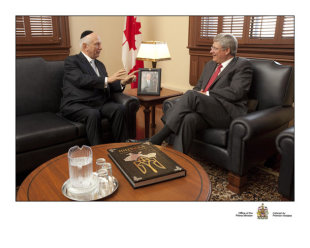 The award is given out annually by the Appeal of Conscience Foundation, founded by Rabbi Arthur Schneier in 1965.

“The Foundation believes that freedom, democracy and human rights are the fundamental values that give nations of the world their best hope for peace, security and shared prosperity.”

In a telephone interview with Yahoo! Canada News, Rabbi Schneier said Harper was chosen as this year’s ‘Statesman’ because of his international leadership for freedom, democracy and human rights.

“One specific issue, but not the only issue is [Canada’s] establishment of the Office of Religious Freedom,” he said.

“But its much broader than that. He is standing up for democracy in the Baltic states and is also [taking] a significant role in the international scene.  When you think of all the major meetings and visits that have taken place in Canada that is really a tribute to [him],” he said.

“I met him for the first time, last week and I must say he impressed me as a leader who knows where he is going with self-confidence and self-assurance and a great defender of democracy.”

Harper will travel to New York on September 27 to accept the award and will speak to a crowd of about 1,000 people with, what Rabbi Schneier calls, a “major address.”

Author of "Lily & Me", "The Royal Navy & Me" and Chapter XXl Armageddon. Writer, blogger and RN Submariner, antique automobile enthusiast.
View all posts by irishroverpei →
This entry was posted in military, politics and tagged fear, Putin, statesman, Submarines, Ukraine.. Bookmark the permalink.