Posted on December 17, 2016 by irishroverpei

We need your help to crown 2016’s Homophobe of the Year. Cast your votes in the first round of match-ups today! 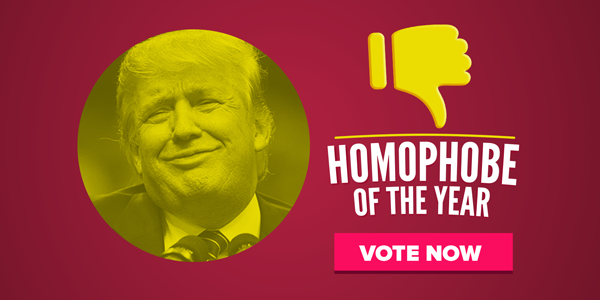 Voting will happen in three rounds, narrowing down the contenders in each round until All Out members have crowned this year’s biggest homophobe. Then we’ll make sure our winner knows what we really think of their anti-LGBT bigotry.

Here’s your chance to call out some of the year’s worst homophobes for what they really are. Like Donald Trump.

Not only did Trump run on the most anti-LGBT Republican platform in the party’s history, but he appointed one of the most notoriously anti-LGBT politicians as his Vice President. Trump has spoken out against marriage equality and supports “religious freedom” bills that legalise discrimination against LGBT people.

His empty pandering and flip flopping on LGBT issues shouldn’t be taken lightly. Every time this attention-seeking, billionaire reality star posts a bigoted tweet, he’s giving millions of people permission to do the same and follow his ways.

Let’s call out homophobes like Trump for what they really are!

Is Trump the worst? Check out the rest of the year’s biggest homophobes and cast your votes today.

Thanks for going All Out,

Author of "Lily & Me", "The Royal Navy & Me" and Chapter XXl Armageddon. Writer, blogger and RN Submariner, antique automobile enthusiast.
View all posts by irishroverpei →
This entry was posted in family and tagged bigot, dangerous, dark ages, frightening., homophobes, trump. Bookmark the permalink.